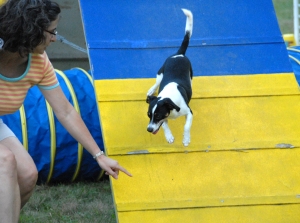 Unfortunately, we don’t practice with Scraps the Dog enough to take full advantage of his natural talents and his connection with Kathy.  Nevertheless, with 2 trials coming up in the next month or two, we thought it would be good and fun to take an 8-week refresher agility class at St Huberts.  It will be outdoors with Sherrie every Monday night at 5:15.

We had Sherri as a teacher four our previous teeter class so she probably thought Scraps was a pretty useless dog  just because teeter is his last obstacle to learn.  Our first night of class was August 24, 2009 and it was a beautiful night to be outdoors at St. Huberts.  In the end, the class has 5 talented dogs and handlers so it goes quick and smoothly and is good practice.  We ran 2 one-half agility courses twice and then combined them in the end.  Scraps was quick and agile impressing Sherri who never really saw him run in the teeter class.  It was a fun and useful class to keep Scraps in shape for the trials coming up.  We have 7-weeks to go.

It’s now 5 weeks into the course and Scraps is doing well.  We have to move the start time to an early 5:00 pm from here on since there are no lights on the field.  Scraps and Kathy have learned not to clap, to run parallel to each other and to do the weaves on both side of the poles.  Check out this video from week 5 recorded with my iPhone.

Below are some runs from the September 28, 2009 and October 5, 2009 classes.  The first day is really good, while the second day is a bit weaker.   Nevertheless, it is all amazing.

Sherri has been teaching Kathy really well and you can see how Kathy and Scraps now run smoothly and under control.  The video below is from the cold October 12, 2009 class.  This is the second to last class.

This entry was posted in Uncategorized and tagged Agility, Scraps. Bookmark the permalink.